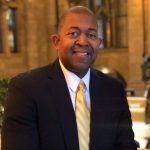 Derek Eurales, Jr. (pronounced “YUU-rulz”) is a Certified Professional Sales and Leadership Coach with a storied history of helping people reach their goals. As an International Speaker, he has spoken on stages in more than 30 countries around the world as Chief of Staff to the World’s #1 Wealth and Business Coach, JT Foxx. He’s a master at leadership development and a Bestselling Author whose books have become Number-One bestsellers on Amazon in the categories of Job Hunting, Careers, Business Etiquette, and 90-Minute Business and Money Short-Reads.

A Veteran and keen supporter of Veteran Entrepreneurship, Derek wrote a three-time bestselling book, “Bet On A Vet,” detailing the value in the Veterans of the United States military he led over a 25 year period with three combat tours to Iraq. The book also highlighted Derek’s expertise in leading teams that amassed more than 6,000 successful career placements. His most recent book, “When I Give You Advice, TAKE IT,” became a bestseller in Business Etiquette and Business Decision-making and is currently being used in training by leaders and teams on 5 continents.

Making a commitment to his education prior to retiring from the military, Derek earned a Bachelor of Science in Human Resources Management from Park University and a Master’s Degree in Christian Ministry from Liberty University. Of particular note, Derek is proud to have served for four years alongside his father as associate pastor of First Opportunity Free Will Baptist Church in Carrier Mills, Illinois. During those years, his book, Principles of Christian Living, gained national attention as a “must-read” for believers of all ages.

While he could boast about friendships with some of the world’s most successful people, Derek is a family man. He has one adult daughter, and he and his wife Cecelia live in Tennessee USA with their four children. He chooses to remain committed to helping those who have the drive to push past their own limitations toward success, regardless of their backgrounds. Having coached thousands of budding entrepreneurs through starting, growing, and expanding their businesses, he’s ready to help you too!